Last year was my first year of making dandelion honey. Now I am translating it in order for you to be able to make it to use in my groundbreaking recipe for vegan creamed honey.

There are a ton of dandelion honey recipes, I just want to make sure that you end up with a honey that actually tastes like honey. Most people will be very skeptical when they hear about dandelion honey. I was too. But trust me, if done right, this stuff tastes very much like honey. 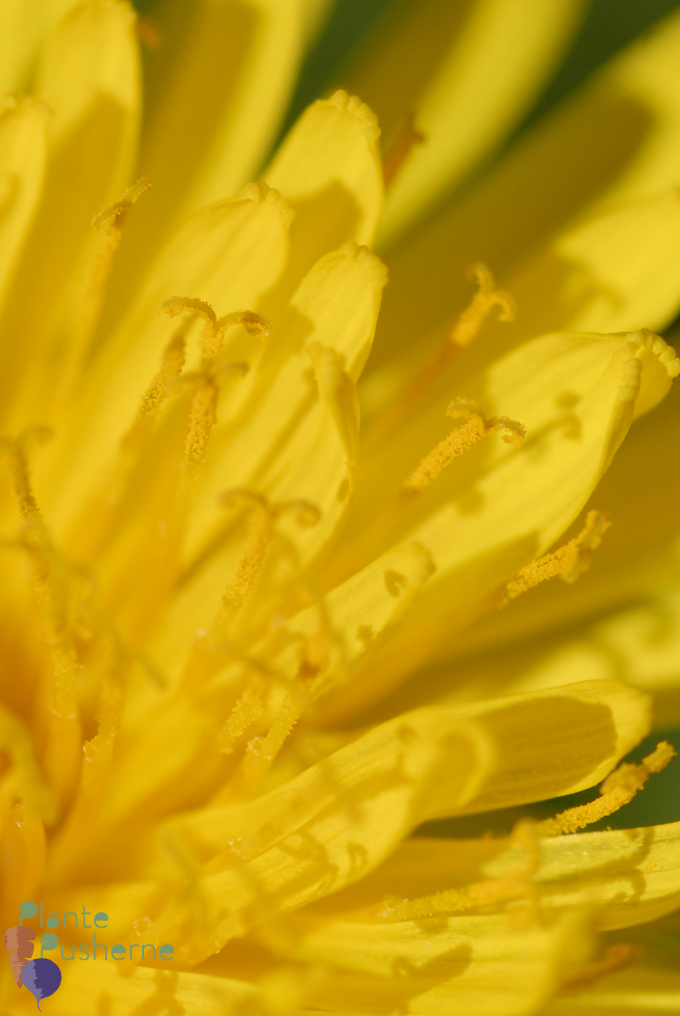 Look at that beautiful yellow powder a.k.a. pollen. We want that  and all the other fragile flower scent adding components in our honey. Not in our sink. So…

Do NOT wash the flowers.

To get little animals out, spread the flower buds on a kitchen towel for a while and they will crawl away. If you are afraid of pollution, Make sure to pick the flowers away from busy roads. If you are afraid of dog piss, consider it rather unlikely for dogs to piss in the middle of a dandelion feel and don’t pick flowers were dogs were typically mark their territory. A safe place will typically be a big field of dandelions if you are lucky enough to have that around. Also note that the 20 to 30 minutes of boiling will kill any bacteria left. And lastly, remember, that the bees won’t wash the flowers before they bring home the pollen and mix it with the regurgitated nectar when making their honey. So why should you? (Unless you live in an area infested by some sort of slug or insect which leaves a poison that you know won’t be neutralized by boiling. Then take your precautions)

Add other edible – and aromatic – flowers

Dandelion is one of the first flowers available in abundance for the bees in the spring. Depending on what area you live in, other flowers will be the ones you typically associate with the smell of honey. If possible you should  add other edible flowers to the mix. Some that have a really strong scent. I live in the middle of a canola flower/rapeseed field this year so I have the opportunity to add those. And that really takes the honey to a whole new level, since canola honey is one of the most common bee honeys available in my country. So the honey association my brain makes when eating this homemade vegan honey is very strong. Other flowers to add are: Wild hibiscus flowers, lavender, Alaskan fire weed, meadowsweet and others. Disclaimer: please only consume flowers that you are 100% certain are edible. If you die from poisoning do not come back complaining that I didn’t warn you.

Adding apples in one form or another provides you with a more complex taste and also mimics some of the fruity acidity present in honey.

What about the green stuff?

Some recipes call for removing the green parts of the dandelions. While this can be done it is rather time-consuming. What I found through my experimentations experience was, that they do add a little chlorophyllic flavor (like a hint of Earl Grey tea), but I only found it a little overpowering in the batch where I left the flowers soaking in the flower juice overnight like some recipes call for. So I recommend leaving the green stuff on (like in the picture below) and then strain the flowers from the juice shortly after boiling it. This will save you a lot of work instead of having to cut them off.

If you insist on cuttin them off, only remove the bottom couple of millimeters (1/8″) or you risk cutting away the nectar. 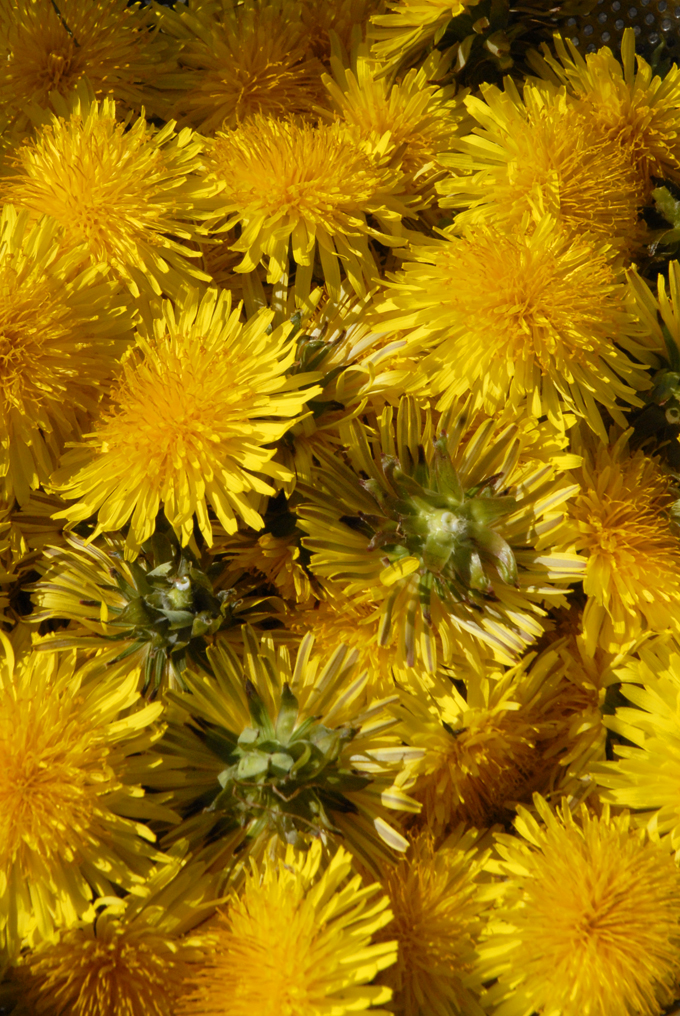 One bee can carry 25 mg of pollen back to the hive in one flight. You can pick a lot more than that in a single trip to the front yard or wherever you happen to be blessed with dandelions. A bee will during its entire lifetime produce about 1/12th of a teaspoon of honey. Consider that. When you are done with my recipe you will have produced at least 7,5 dl or 3.2 cups (and I know this is not a competition, but that’s 150 teaspoons – or 1800/12th teaspoons – if you really want to go there).

When picking dandelions – get the most flavor from them

– The warmer the weather the more nectar they contain. If possible go pick them on a warm sunny day.

– Before nipping off the flowers, gently tap it to shake off any little animals. Also have a quick look at the flowers and go for those with the least amount of habitants.

– Cut the flowers off just at the end of the stalk.

– The bigger the flower, the more nectar = yum!

– Theoretically, If you’re unable to pick enough flowers for one entire batch, you could put them in the fridge or even freezer along the way and save them for when you have enough. Some of the taste might get lost this way though and it’s my impression that boiling them directly after picking yields the most flavor.

– Pick flowers that are open. This way you access all the nice scents. This also means you can’t pick them in the evening, since they close up. Nap time! Also, you can’t pick them if a rain is coming (or happening) because they will close up to protect their pollen and nectar from washing away. (The same reason you shouldn’t wash them, see?)

How to make vegan honey 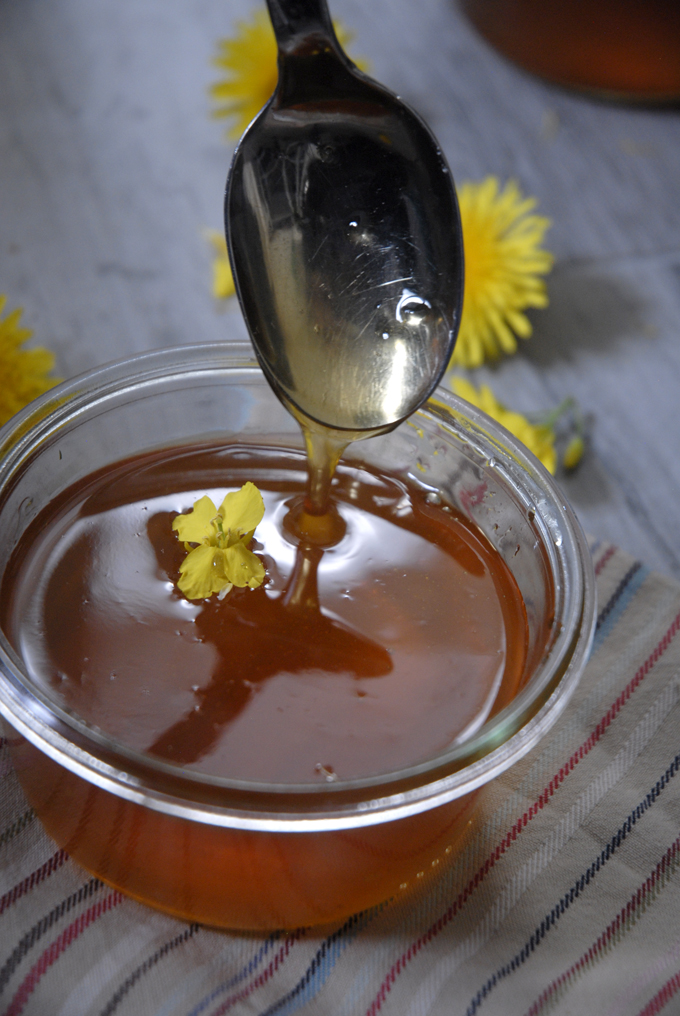 How long to reduce it

I recommend taking your time with this. Bring it to a gentle simmer in the beginning and reduce that to only evaporation towards the end. This way the water will slowly but surely evaporatorate. When about 2/3 of the syrup is left, you need to keep an extra eye on it, because all of a sudden it gets really thick! This is also where you can start taking little samples out to check the consistency. You want it thick but still runny and you want it to be clear not dark (see pictures for reference). Thicker than agavesyrup, but definitely not spreadable. I want to say like an organic barley or corn syrup but of course I can’t know what that looks like in your area 😬 If you have used regular pure white sugar, your hunny will look lighter than in these pictures.

Check Consistency: Place a small plate or bowl in the refrigerator. When you want to test the consistency, you pour half a teaspoon syrup on the cold plate and it will quickly come to room temperature.

Color: The honey in these pictures are made with a light brown cane sugar. This yields a slightly darker color than when using pure white sugar. If you reduce the syrup too much, it will be very dark, not be transparent and also smell slightly burned sort of over caramelized.

Try this amazing recipe for vegan dandelion honey - that tastes so much like honey you wont believe it! When the dandelion honey is sufficiently reduced you'll end up with ABOUT 8 dl or 3,4 cups or 1,120 kg or 2,5 lb. - but check other tips in the post, like color, to be more certain of when it has reduced sufficiently.
condimnent, DIY, vegan
af Nina fra Plantepusherne
8 dl

Preferably but optional if not easily accessible: Another bunch of edible, aromatic flowers. I added:

-Apples: if you can't get apples, a 1/3 cup or 80 mL of some good quality apple juice will probably do. Omit the same amount of water and add the apple juice together with the sugar. -Shelf life: With the extremely high sugar content the shelflife is practically indefinite. I have had samples sitting on my kitchen counter for a year without going bad. If you really want, you can even freeze it. It won't change the consistency and it doesn't even set hard because of the high sugar content. -It got too thick! - or too thin ... See notes on this below.
Har du lavet en af vores opskrifter?Del endelig! Brug @plantepusherne eller tag os #plantepusherne :o)

It got too thick!

If you accidentally reduced it too much, you can make it a bit thinner by adding some boiled water. But you may have crossed the line of no return, if it got very very thick because then it will have a slightly burnt taste and you won’t be able to get rid of that. Too thin is always better…

It got too thin!

If, when the honey has cooled down, you realize it is much too runny, there is always the option to put it back on the stove to let it evaporate more. This can be time consuming though. I stumbled upon a trick where you simply add a little (home)powdered sugar into the still hot dandelion sirup. This will melt and thicken the mix. You can also leave it on the kitchen table with a piece of cloth over to protect it from dust. During a couple of weeks it will evaporate even more. I have managed to make the creamed honey with a batch that I thought was way too runny so don’t worry too much about that.

And now that you’ve made a batch of beautiful aromatic dandelion honey, you are ready to take it to the next level: Vegan creamed hunny. 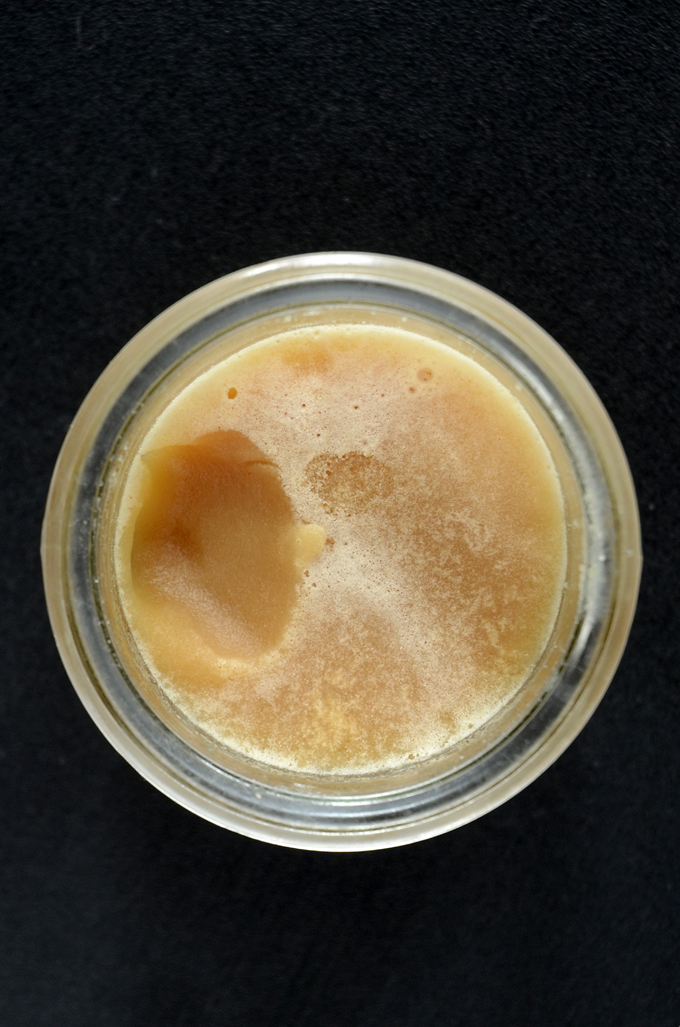 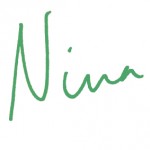 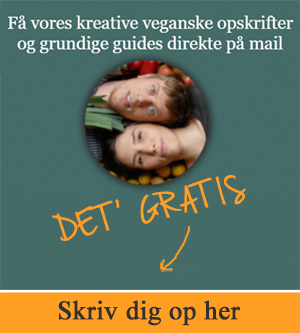 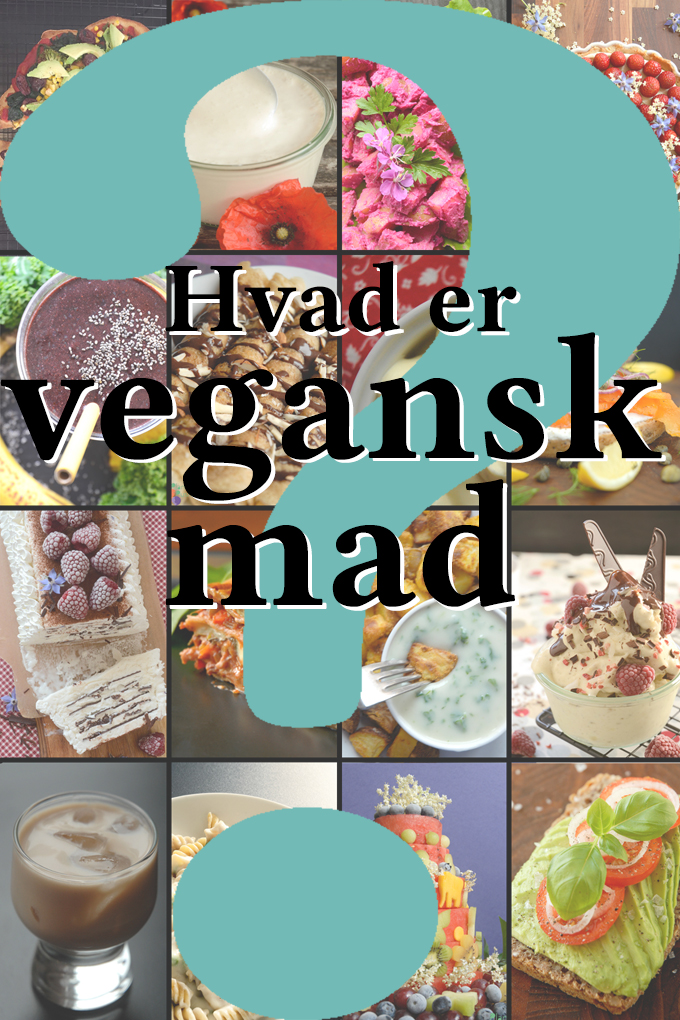